A Day in the Life of a PCC Operator 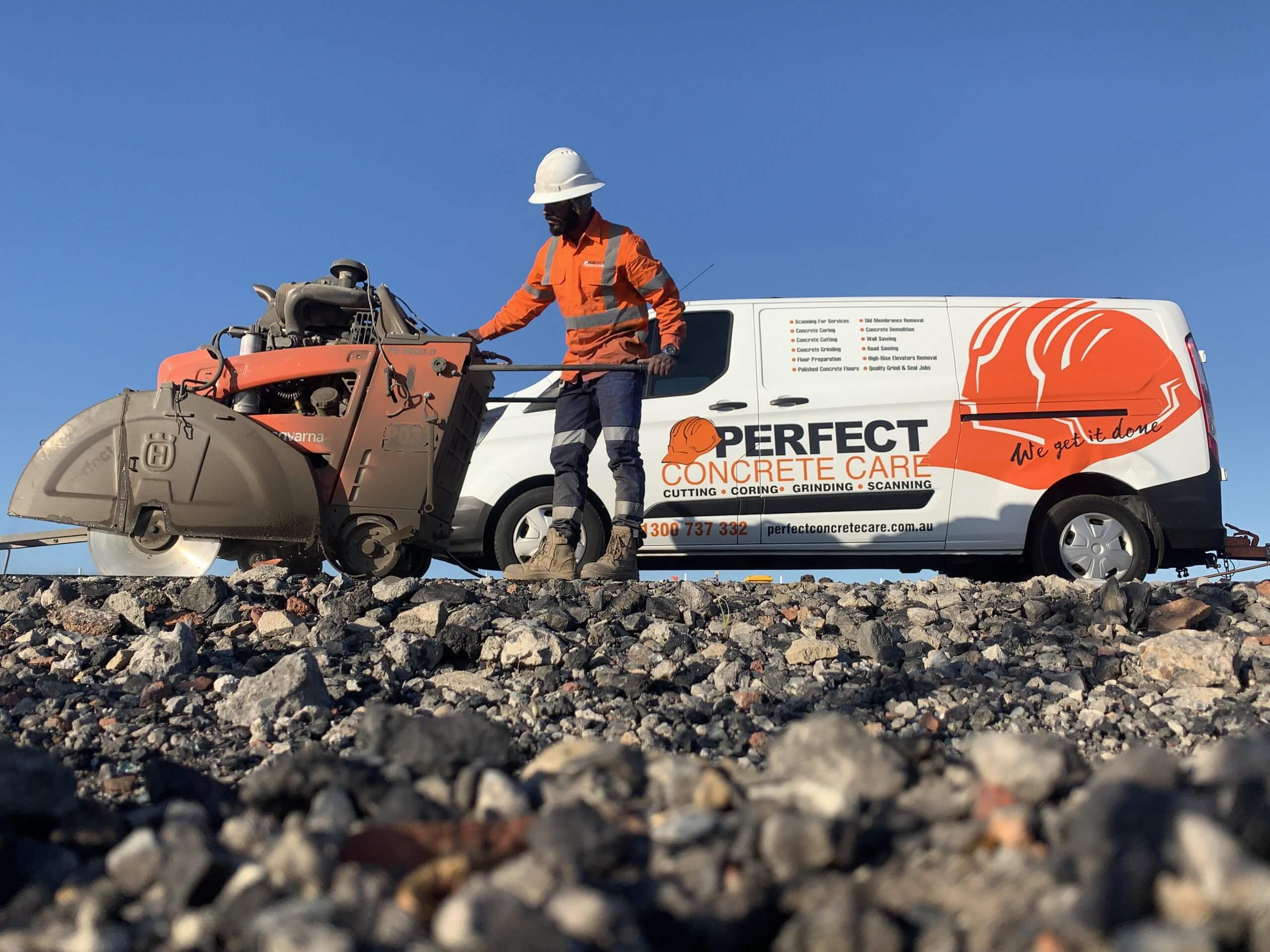 The sound of a gentle beach break wakes you as the sun pushes its way into the perfect blue sky. You swing your feet to the heated marble floor and check the time on your Rolex: 9.15am. The smell of coffee fills the air as your automated espresso machine does its work. As you make your way into the lounge room the morning view of Double Bay greets you through twenty foot floor-to-ceiling glass. Your dry-cleaned Perfect Concrete Care uniform hangs neatly nearby. Through the open door behind it your Perfect Concrete Care Dodge Ram awaits. Man, what a life! But then the harsh sound of a relentless alarm clock pierces the air like an air raid siren. ‘That’s odd,’ you think, ‘I don’t use an alarm clock.’ Puzzled, you look around the apartment again only to find yourself..

..back in bed with your phone vibrating beside you. What?? You touch your feet to the floor but the heated marble is nowhere to be seen. Huh?? You listen for the beach break but there’s only the sound of a rumbling train! Distraught, you run to the lounge to find no automated coffee, no Double Bay views and no Dodge Ram – just the remote control being chewed up by your one year old pup, Max.

It was all just a dream.

Twenty minutes later though you’re warming up the brand new van that’s part of your package at Perfect Concrete Care. You pull out onto the street, the early morning sun splitting the sky and your favourite tunes on the radio. It might not be Double Bay good, but it’s still pretty damn fine.

Ironically, Lucas’ day actually began the night before with his allocations. Sent via the Assignar Fieldworker app, the allocation outlines the tasks for the next day, including the time and location, contact details of the client, works overview and specials instructions. Because many elements of his work life reflect autonomy, Lucas is responsible for getting to site by the allocated time.

At 6.15am the next morning Lucas was swinging by the Wolli Creek Station to pick me up. Soon we were winging it to a Perfect Contracting job in Greenwich. I must say, Lucas’ van is impeccably clean. It makes sense though when it’s your office for 40+ hours a week. As we crossed the harbour bridge I asked Lucas why he likes working for Concrete Care.

‘The pay is good. They give me a nice new van that I get to take home every night. If I do my job they leave me alone. I visit lots of sites across the city so I see a lot of new things. I enjoy the technical side of concrete cutting and coring and scanning. There’s always a challenge.’

In truth I only expected one or two reasons. Six is very good. After a quick stop at a back street coffee house that only Lucas knows we arrived at Greenwich. Ten minutes early no doubt. Luckily we did because there was only one access point to the site and ten truck-and-dogs in wait. We quickly snuck the van into the driveway, unloaded the demo/ring saws and fuel, found a four hour spot on a nearby street and headed over to the site office.

After a brief induction and safety walk, PC Supervisor Nathan laid out the scope for us. With the saws & fuel passed down to us in an excavator bucket, a few minutes later Lucas was taking detailed pictures of the works zone and completing the PCC Pre Job Form in the Fieldworker app. The form records vital data that allows PCC heads Jaro and Rodrigo to settle disputes, invoice clients and complete other admin tasks.

Before Lucas began cutting I needed him to explain a few things to me. Essentially we were making horizontal cuts to the lower edge of an existing concrete wall that helped form the perimeter of a five sub-level ex-hospital. The wall was originally tied into the now demolished floor slab but because the design called for deeper excavation by some seven metres, that floor was long gone – hammered out by hydraulic breakers. So now there was a seven metre gap between the lower edge of the existing wall and the new floor slab. The gap was to be shotcreted in the near future. Reinforcement would be via a series of vertical rods that tied the existing wall into the new floor slab. Except to drill and set the rod in the lower edge of the existing wall meant the ugly jackhammered edge needed to be cut clean. Enter PCC.

By now, Lucas was fully kitted out: long sleeved hi vis, hard hat, glasses, gloves, boots, earplugs. Despite the heat and humidity in that big civil hole he was even in a respirator. I donned my own PPE as Lucas fired up the demo saw. Like some kind of medieval warrior he made a single 22m horizontal cut, only stopping four times. It was pretty impressive. After knocking back a litre of water he fired up the ring saw and got stuck in again. Why the two cuts? The demo saw can only cut to 175mm whereas the ring can cut to 315mm. The wall was 300 thick. Having made the majority of the cut with the first pass Lucas was able to slice through the last 125mm fairly easily. As he did the waste concrete began drooping so every couple of metres he simply sliced the end off. Soon the wall had a perfect 90 degree cut on the lower side instead of the chipped and mangled breaker effort we began with.

Working on a Perfect Contracting site meant we could ask the machine operators to clean up the offcuts. While Lucas was completing his PCC Post Job Form I signalled our operator Yuri, who tracked over in the 8t. A few bucket swings later saw the offending concrete tossed in the rubble pile.

After Nathan’s careful inspection he gave it the thumbs up, signed Lucas’ docket book and sent us on our way. One 24t digger bucket saw all the gear back at street level and in 15 mins we were headed for the BP on the Pacific Highway in Artarmon. It was 11.00am. After refuelling both the van and ourselves we hit the road for Lucas’ second allocation for the day: coring for a long term commercial client in Moore Park.

When we arrived at the job the client was waiting for us. He opened the ancient roller door on the abandoned 1950’s warehouse and we parked inside. Nice not to have to search for a park!

After a brief chat Steve led us into the disused ‘office’. The job consisted of six 100mm core holes in various locations to run services. Apparently the building had been bought by newly Aussified Zac Efron and was being converted into a kind of a man supercave – the kind where you park your 715hp Liquid Crimson coloured Aston Martin DBS right next to your bed. Lucas took plenty of photos before completing his PCC Pre Job Form in the Fieldworker app.

All the core holes were in vertical surfaces so Lucas made sure I brought the cradle from the van. After getting Steve to mark the holes [Lucas reckons you always get the client to mark cuts and holes], Lucas enquired about slurry control. Steve didn’t care – he just wanted the holes cored today. So Lucas got to work.

He sat the empty cradle in situ for the first hole. He marked for the two dynabolts, handed the cradle to me and began drilling. With the Hilti 1000 on hammer-drill mode and aqn 11mm bit those old bricks were soon fine red dust dust. Moments later he was tapping M12 dynabolts in place and carefully rattling them home so as not to catch my cradle holding digits.

‘Is it strong enough?’ I asked.

Lucas jumped up and did five chin ups off it. I guess it was. He slid the core drill into place, screwed in the handwheel arms, plumbed in tap water and fired up the saw. Three minutes later there was a perfectly round 100mm hole in an old brick wall in Moore Park. Lucas called Steve over to check that he was satisfied. He was, so Lucas marked and drilled the dynabolts for the next core hole. Repeat.

About an hour and half later the slurry on Lucas’ boots indicated all six holes were cored. We demobilised the cradle, drill and barrel back to the van and caught up with Steve. Lucas did his PCC Post Job Form, got Steve to sign his docket book and within a few minutes we were on the road again. It was 2.45pm. With a marketing meeting at the office calling me we deviated into Marrickville. Lucas took the opportunity to grab some consumables, some PPE and a new demo saw blade before heading home.

It got me thinking that maybe working in marketing isn’t all it cracked up to be. Ha.

If you’d like to discuss becoming a Perfect Concrete Care Operator please contact Rodrigo on 0481 231 493. But only after I do.

We Get It Done. 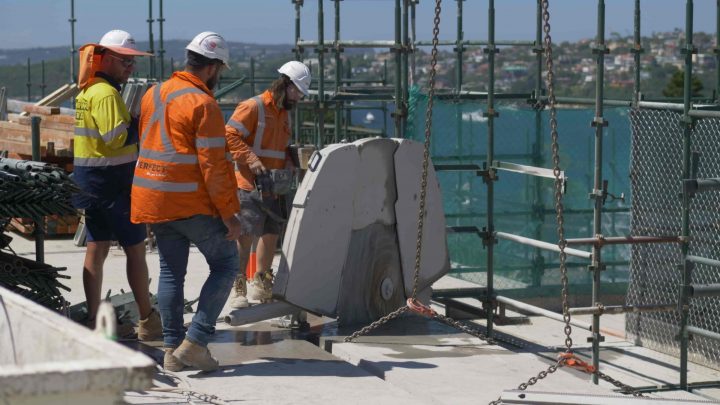 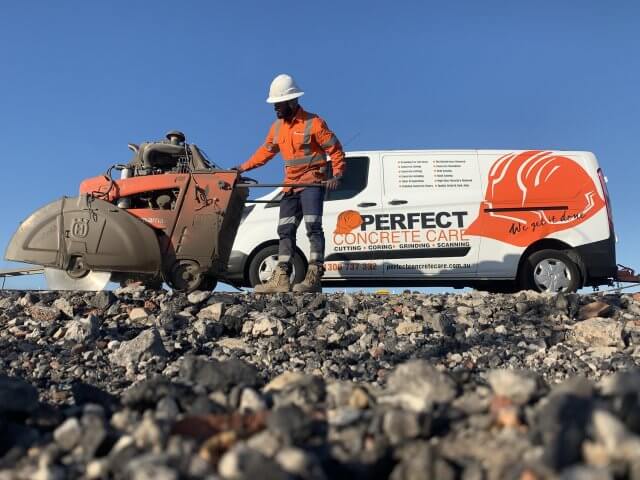 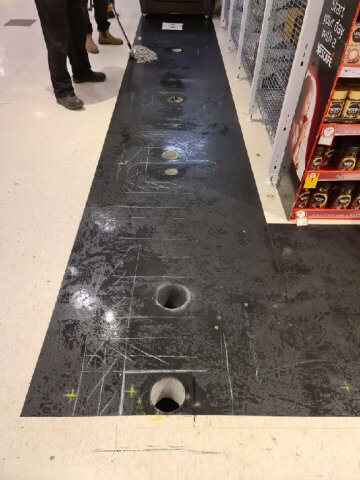 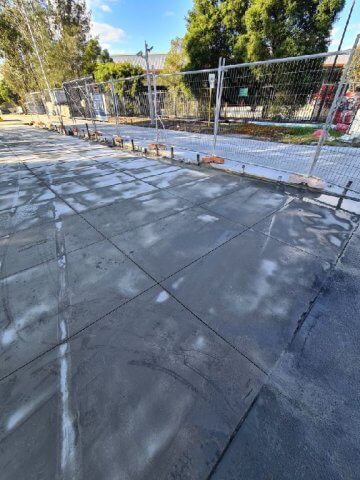 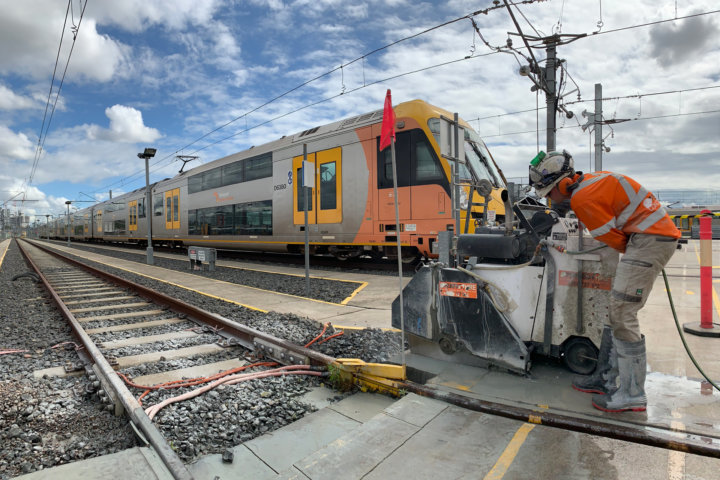