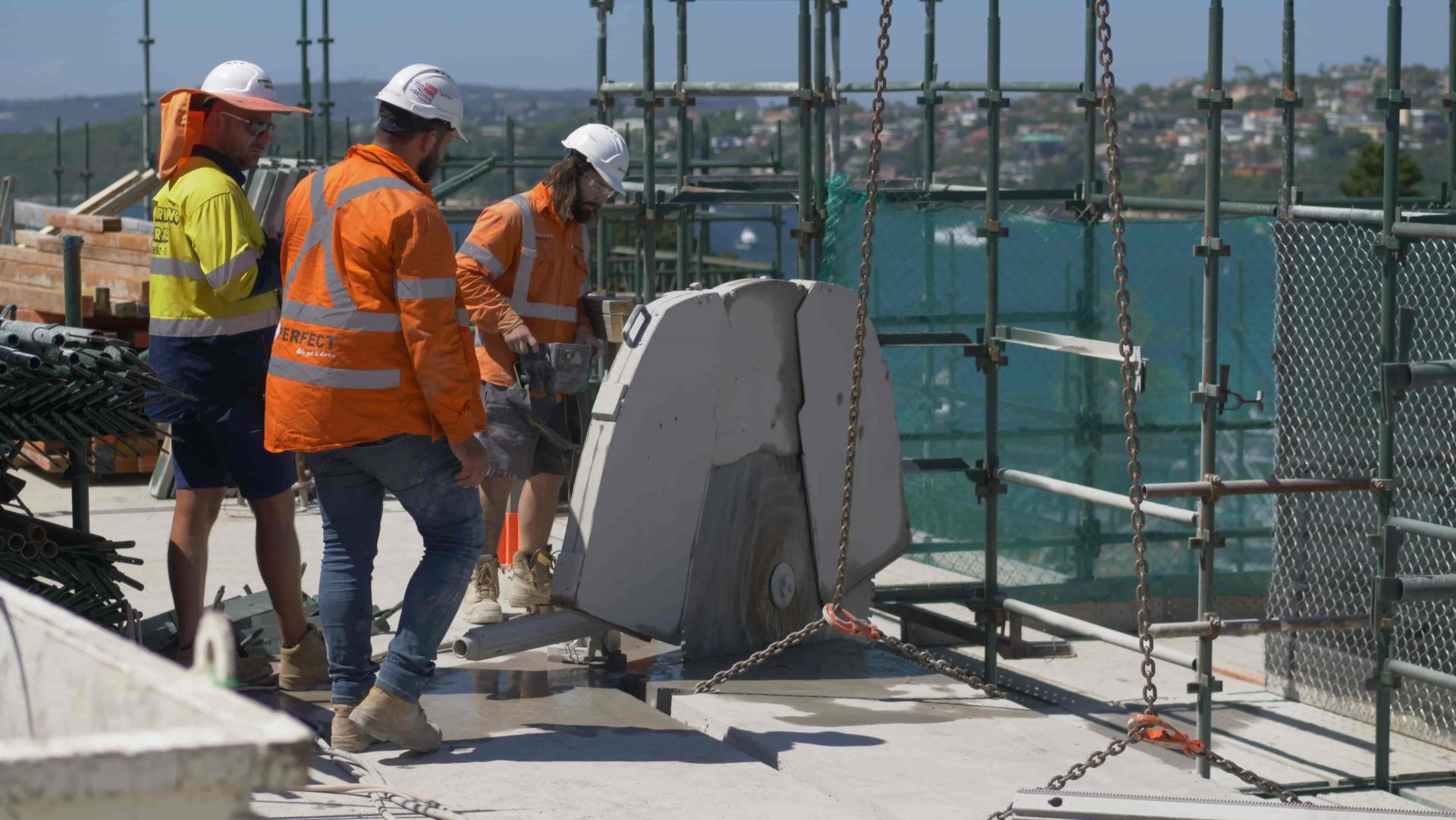 From our early days at UTS’ Lindfield Campus to the Cambelltown Hospital upgrade and now at a prestigious school in Bellevue Hill, Taylor and Perfect have shared more pre-starts than we can recall. And with the historic college scheduled for some tasteful upgrades, Taylor called on the Perfect Group once again for our demolition expertise. Except this time it was in the form of Perfect Concrete Care clan.

Since the Bellevue Hill project inception in mid 2021, PCC has completed a multitude of technically challenging cores and relief cuts to existing buildings to serve the new design. Using our full complement of equipment including our wall saw, senior PCC hands Lucas and Murilo worked extensively with Taylor to ensure demolition works were to spec.

Because the retention of existing buildings were vital and the boys were removing structural members, the material surrounding the cuts was always propped by Taylor prior to our arrival. Dark green standards and chalky grey concrete made the floor below look like a rainforest with a concrete canopy. Additionally, the area under the fall zone was delineated and a spotter assigned to prevent access.

Our first day at the school proved very Tartan indeed, with heavy rains the night before and steady drizzle all day. The first beam to be removed was sandwiched between existing buildings. 450mm wide and deep and some 20+ metres long Lucas cored the beam every 800mm to allow lifting chains through. Additionally, because the design called for millimetre precision, Lucas actually used core holes to cut the slab into manageable lengths instead of a saw. Its a more involved process but yields a better result as the retained concrete bears no undue cutting.

He then cut the beam 75% through down its entire length. The remaining 25% was enough to hold it until the chains took the weight. Once the crane was established and the material rigged he cut the last quarter of each 800mm long piece. One by one the pieces were craned out and disposed of in a Perfect skip destined for recycling. It was a full ten hour day but all works were completed on time as promised.

Another day, another beam. The second member was only 2100 long, so it was a far shorter proposition. Following the same routine as before Lucas cored the beam across its width, then cut three-quarters the way through in readiness for lifting. Final cuts coupled with a few quick pulls on the jib and the chunks were free and riding the air into a skip.

Down on ground level three courses of double brick had to jackhammered free. Lucas spent the rest of the day on the T800 and by day’s end had amassed hundreds of bricks for Taylor to dispose of.

With Lucas allocated elsewhere Murilo performed the next phase: slab removal at height. Using a process known as stitch-coring to prevent cutting into the retained slab, Murilo barrelled his way through scores of cores to deliver some highly technical demolition. The waste was craned out, with Taylor to handle the tipping

Murilo returned a few days later to neaten up the material left behind by the stitch coring. Using the expansive cutting depth afforded by Tyrolit’s WSE1217 as well as the arrow straight cuts allowed by its rail system, he was able to trim the edge of the slab dead square.

Five months had gone by since our last wall saw, so Taylor thought it time we returned. Murilo and Lucas are legendary so there’s a good chance they just missed us! Another edge cut was the order of the day and, as before the slab was cored for rigging, cut into shorter lengths and then craned out once final cuts were made. Murilo and Co. demo’d 25+ metres in a single day, making it our largest completed works on the job to date. Taylor were exceedingly happy and booked us in for the following Monday.

From the outside this final edge cut looked very similar to the previous two except for one factor: there was no crane. An area on the slab below had been cleared and delineated specifically to capture the falling rubble. Murilo cut the material into smaller, more manageable pieces. This also allowed greater fall control. One sunny day in February saw the edge beam fully demo’d.

Mr. Smiles aka Douglas Andrade was on hand to clean up the waste from the previous day’s demo. With bucket, shovel and the heart of a lion he manhandled scores of concrete blocks into the Perfect skip landed that morning.

This was the final day on site for PCC with the task cutting a wedge shaped piece of the slab from the eastern side edge of the top floor. In the blazing 33* sun, slathered in 50+ Murilo cored lifting points into the slab before setting up the wall saw on Taylor’s marks. With the area delineated he fired up the 1217 and cut 80% of the slab in readiness for the crane.

Soon afterwards the crane was established and swinging chains into place. The slab was rigged and Murilo was green lit to make the final cuts. With the only issue of a temporarily trapped wall saw blade, the crane went up on the rope and the wedge was gone.

Cutting concrete into pieces at height on a live job site isn’t for the faint hearted. There’s a lot that can go wrong, especially when some of those pieces weigh 5t each. Complicated scopes like this are all in a day’s work for Concrete Care. Despite this, we haven’t had an incident since our inception in 2015. We have guys like Lucas, Douglas and Murilo to thank for that.

We Get It Done.

PERFECT CONCRETE CARE is capable of carrying out project like Bellevue Hill – Wall Saws, Core Holes, Concrete Cutting and Cranes in the Eastern ‘Burbs with a quick turn around, give us a call today on (02) 7202 2724.