Unita and Perfect Make Good: A Positive Partnership in Rosehill 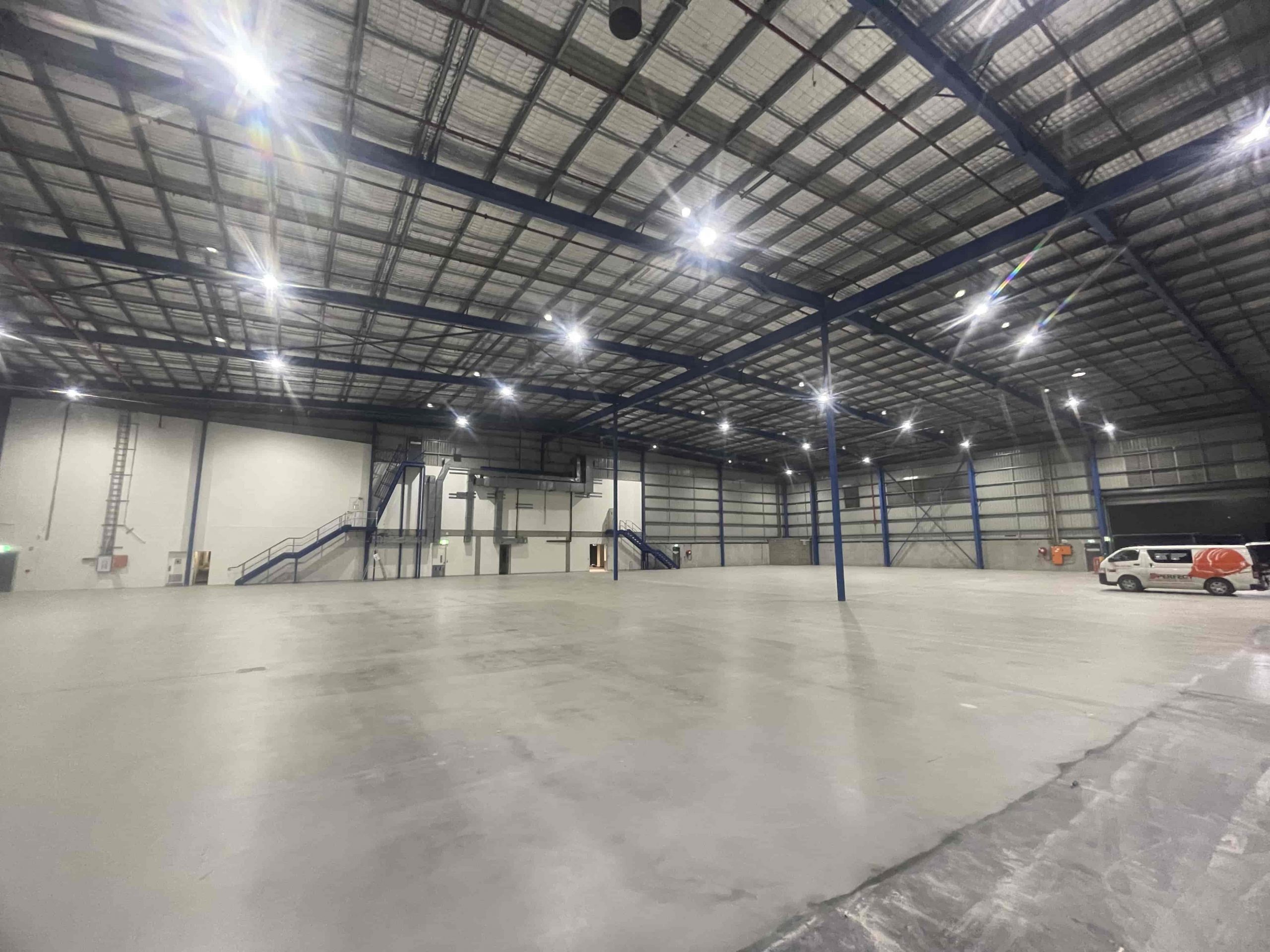 Now that Perfect Contracting had completed the defit via structural steel demo, soft strip and rubbish removal – it was time for Concrete Care to shine. The day after the two Jarek’s left, six PCC vans descended on the job for the final phase of Unita’s Defit and Make Good.
Fuji Xerox’s decade-long tenancy had brought with it the idiosyncrasies of long term tenure. This presented several challenges for their clean exit.

Person-plant interaction is always a risk where floorspace is shared by both foot and vehicular traffic. One solution is delineation in the form of tactile linemarking. This is where the paint contains material that raises the surface above the exisiting floor level.
This kind of delineation gives kinaesthetic and audible warnings when vehicular contact is made with it, making it very advantageous. In short, it vibrates through the vehicle when driven over. It also creates a loud humming noise to alert the operator they’ve strayed out of bounds. Additionally, the raised surface feels different underfoot than smooth concrete when walked over. Tactile linemarking is extremely durable, hard wearing and long lasting. Which brings us to its disadvantage: its extremely durable, hard wearing and long lasting.
Mechanical means is the only way to remove tactile linemarking and this means grinders. By grinders we mean hand grinders. This is not your ordinary 5” with a masonry grinding wheel. Its a specialised machine that accepts unique discs specifically designed for this task. The trick is to remove only the linemarking down to slab level and not below. And because you only get one shot at it and concrete remediation can be expensive, you need to use the right tool for the job.
Perfect Concrete Care has completed hundreds of hand grinding superstrates such as tactile linemarking. At Unita’s Rosehill job that’s exactly what they did. The sheer size of Fuji’s operation meant a 5000m2 footprint, and that meant hundreds of metres of hand grinding. And with a tight timeline to Get It Done, the team whipped themselves into action.

With Douglas and Angelo were on hand grinding duties, Reece and Carlos began the monumental task of rectifying the remnants of 500+ dynabolts. The very best method for a clean finish is to remove the concrete around the bolt with a core drill and then patch the hole. The boys spun 36mm barrels onto Tyrolit drills and began coring down 100mm. Repeat x 500.

With the floor looking more like a grey 500 hold golf course than a warehouse, concrete rectification specialist Angelo began patching. In the world of concrete floor repair, quick set concrete will do the job if the design calls for just an even surface. But if in future there’s any strength asked of the patch then concrete simply won’t do. Perfect Concrete Care utilises Sika’s epoxy patching resin because it cures strong enough to allow torsional loading, meaning it can be dynabolted again. So Angelo completed all 500 holes as well as some incidental damage that had been pre-marked by Unita.

Meanwhile, Carlos had been stripping hundreds of metres of walkways back to slab level with the remote grinder. Inch by inch the original smooth, shiny surface began to appear once more. Almost four full weeks had passed since PCC took over.

The final step of these processes is to seal the slab to prevent the entry of impurities. PCC uses a product called Viroseal, which is a water based penetrating sealant. Because it seeps into the slab its protection is far superior than merely surface coatings – and its environmentally sound to boot. They filled their pumps, adjusted their nozzles and began spraying in the race to the finish line. Several hours later the boys set down their pumps and began to pack down.

It took six full weeks from go to whoa to complete the Defit and Make Good. Nine demo workers, six concrete care operators, three forklifts, two EWP’s, one Volvo digger and a partridge in a pear tree. But as promised, Perfect made the handover to Unita on time and within budget.

With any luck they’ll call us back when the next tenant moves out.

We Got It Done, son.

PERFECT CONCRETE CARE is capable of carrying out project like Unita and Perfect Make Good: A Positive Partnership in Rosehill with a quick turn around, give us a call today on (02) 7202 2724.