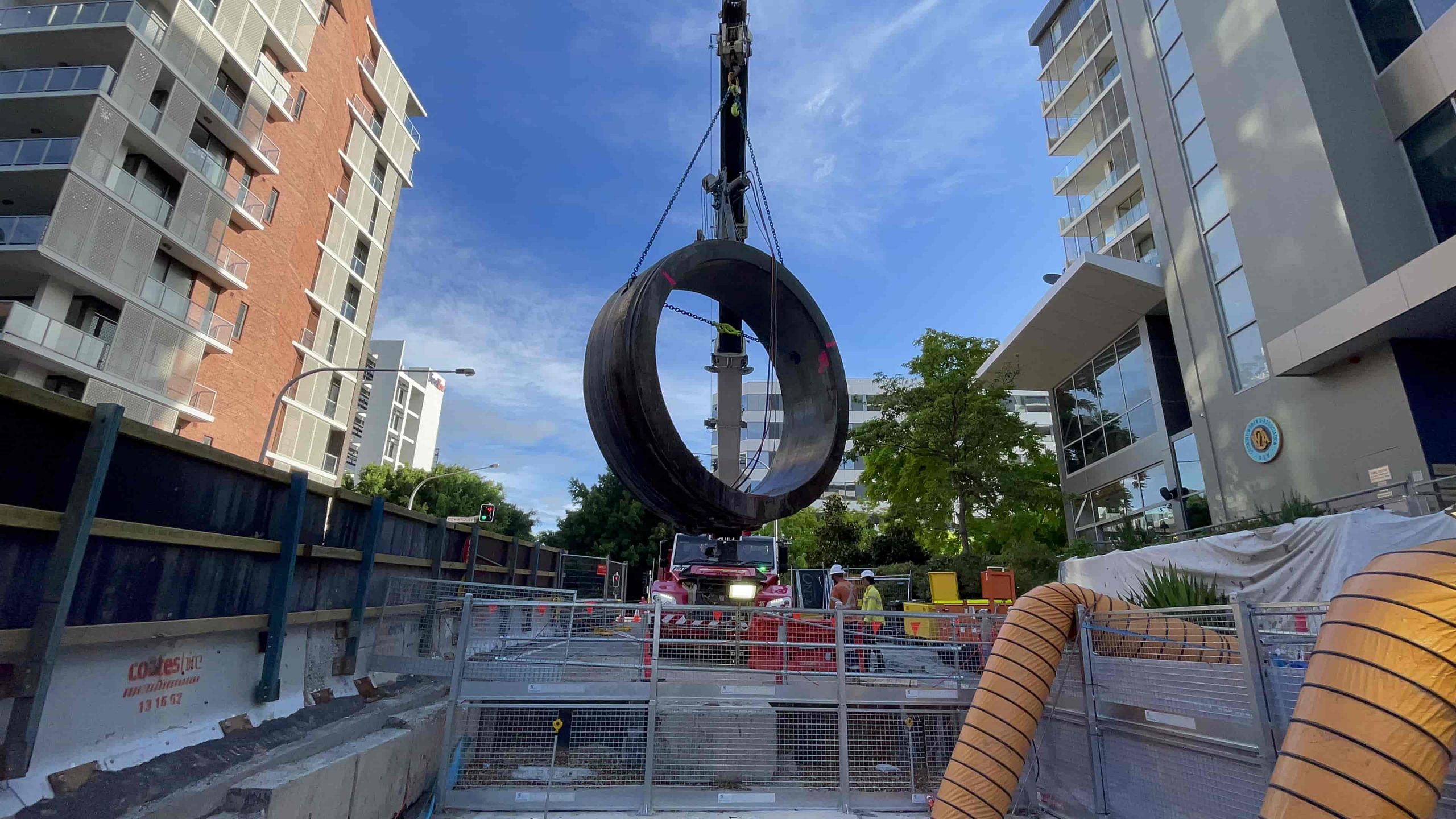 Sydney’s rail network is in the midst of its largest modernisation ever. One of the programs, More Trains, More Services, will simplify and modernise the rail network, creating high-capacity turn-up-and-go services. It means customers can expect more frequent train services, shorter wait times and less crowding across a simpler and more reliable network. More than $5.3b is being invested in the new scheme, which has already delivered 41 new trains as well as 1700 additionally weekly services since its inception in 2017.

The man on that core drill is Murilo. He’s 175cm tall, making that pipe a full 3m in diameter! Perfect has been a delivery partner with John Holland almost since our inception over a decade ago. With demo and hazmat by Contracting, skilled labour by Hire and cutting/coring/scanning by Concrete Care, Perfect has been behind the hoarding of plenty of Mr. Holland’s sites. So when the tier one builder needed some specialised wire sawing done for Stage II of the MTMS, there was only one place they knew they could turn to Get It Done.

The increased electrical demands of the MTMS meant a new substation. Residences in O’Riordan street, Mascot were resumed for the task. The substation is a vital energy hub that will help power the additional trains and services well into the future. Thirty-six 33KVa cables would channel the extra load between the substation and Mascot station. That many gigawatts means going underground, and going underground meant tunnelling. Despite Perfect’s recent tunnelling successes in Mosman that’s not where come in. We came here with diamond encrusted wire.

Access to build and service the tunnel was via a pit at each end some 10m below the surface. Once bored, the tunnel was lined with hundreds of pre-cast pipes that were joined and sealed in situ. With the tunnel complete the remaining civil work was all in the pits: demo, removal of construction waste, waterproofing and shotcreting. The scope called for the tunnel face to be flush with the pit walls which would aid in membrane installation for a good seal. But as pre-cast pipe was used with pre-determined lengths, the tunnel was 1500mm proud on each end. This would not do.

PCC Ops Mgr Rodrigo Contar headed up the pricing and methodology. With a multitude of factors like weather, the need for a boom lift, an on-site crane and three-phase power – there was much to consider. Go ahead was given soon after, so on 24th January Rodrigo, Murilo and our shiny blue Tyrolit wire saw arrived on site.

Starting at the substation end, the saw was gently craned into the pit and set down on top of the tunnel extrusion. For those unfamiliar with the process of wire sawing, it works by running a diamond encrusted wire around the offending material, the motion of which is driven by a three-phase motor through a series of pulleys that control tension and speed. Coupled with the cooling and lubricative properties of water, the wire ‘saws’ its way through concrete, rebar – anything – with relative ease.

The advantages of wire sawing are:

Wire sawing is one of those processes where almost all the taxing work is in the preparation. It’s also a process that once sawing has begun its extremely difficult to recalibrate if your cut isn’t where its supposed to be. This means you must consider errors and obstacles far in advance. So with the wire saw landed, Rodrigo began setup – anchoring the saw body, running power and water etc. Remember, the pipe was 3.5m in the air so any adjustments had to be done from the end of an <11m boom.

With the saw set and Rodrigo satisfied, Murilo began coring lifting points into the pre-cast so that once cut it could be lifted straight out. As the piece would weigh a good few tonnes they saw it fit to co-ordinate with the crane crew. The dogman preferred a one leg basket sling with a maximum angle of 60*, so Murilo cored lifting holes that would do just that. Given that the pipe wall was 200mm thick and he would be coring above his head he utilised the cradle – a bolt-down attachment for holding a core drill. This anchored in and with final approval of their location, Murilo got down to coring. An hour later and the dogman was passing 20mm chains through the new apertures. Once rigged he came up a little on the winch and the crane had the weight. It was go time.

With final checks complete and John Holland’s green light he lit up the wire saw. For the next five hours the translucent diamond snake ate at the pipe, leaving nothing but a pool of smooth, grey slurry in the bottom of the pit. Inch by inch the diamonds cut the pre-cast. Foot by foot it split in two. As the wire approached its last few inches, the crane operator reported that they had 7.8t on the hook. Calculations had put the weight of the off-cut at 7.2t so there was a good margin for error. With the dogman’s approval, Rodrigo powered on to the finish line. As the wire disintegrated the last thou of material the giant concrete ring broke free with almost no uncontrolled movement.

Two short whistle blasts from the dogman saw the pipe disappear into the late afternoon sky. It had been eleven hours since they’d arrived. A close inspection of the cut revealed Rodrigo had done a superb job. The job was gloriously neat. It was just about as flush as could be with no damage, no incidents and now – no extruding pre-cast pipe. One down. One to go.

The very next morning Rodrigo and Murilo demobilised to the second pit. Their gear was landed by the crane and they began setup. Except there was a hurdle: waste. The demolition contractors up the line had left concrete waste all through the pit, including under the pipe extrusion where the cut needed to be. With no way of encompassing the wire around the material without destroying it, Rodrigo made the call to manually cut the bottom quarter of the pipe. This would be a far more labour intensive proposition but without sourcing and craning in a demolition excavator to manage the waste this was the only option.

With the approval of the dogman, lifting points were cored into the pipe. With the crane on stand-by, Murilo fired up the HF demo saw and made the first cuts. For the uninitiated, the HF saw is a three-phase [non-combustion engine] concrete cutting saw that cuts to a depth of 145mm. With the bottom quarter of the pipe cut to full depth, Murilo retired the HF demo saw and wheeled the HF ring saw into service. Utilising a ring-style blade driven by drive wheels [as opposed to a hub-mounted blade driven by belts], the HF ring can cut to 270mm. This made short work of the 200mm thick pipe wall. A few hours later it was after lunch, and with a 6-7 hour wire saw cut ahead of them Rodrigo called it a day.

The next morning Rodrigo and Murilo were straight into wire saw setup. With only 75% of the original cut to be completed things would move more swiftly now. The wire saw body was anchored and powered, translucent diamond snake was run and water was plumbed. The dogman hitched up his chains, the crane took the weight and Rodrigo was green-lit. For the next four hours the wire turned concrete to slurry. Drama makes for good reading but poor site work – in this case there was none. Rodrigo slowly but surely sawed the pipe extrusion off. As before the piece came free with very little uncontrolled movement, a testament to the professionalism of Borger’s. Two whistle blasts from the dogman saw the offcut disappear and Murilo and Rodrigo demobilised.

The only thing left to do now was cut the rings into manageable pieces for disposal. A couple of hours on two-stroke Huskies and those 7t concrete rings were no more.

We Came, We Wire Sawed, We Concrete-quered

PERFECT CONCRETE CARE is capable of carrying out project like Wire Sawing for John Holland’s MTMS in Mascot with a quick turn around, give us a call today on (02) 7202 2724.